Construction is the backbone of industry. Without construction there would be no homes, businesses, schools, or warehouses. In recent years, the construction industry has seen a marked increase in the share of projects that are large scale energy and transportation projects. This is true in the United States and across most advanced nations around the world. The question then becomes: how did this shift take place and why?

The Current State of Infrastructure Construction 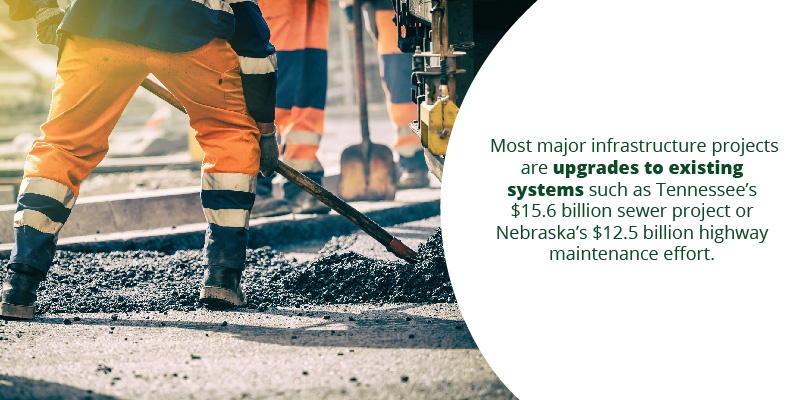 The American infrastructure is aging. Most major infrastructure projects are upgrades to existing systems such as Tennessee’s $15.6 billion sewer project or Nebraska’s $12.5 billion highway maintenance effort. Let’s take a deeper dive to understand how modern infrastructure construction budgets are being allocated by examining the Nebraska transportation transportation update:

This plan may be specific to Nebraska, but it is indicative of a typical mega-construction project in the US today. As you can see by the numbers, the number one concern for many areas is simply upkeeping the existing infrastructure. Modernization and expansion efforts take up less than half of the budget.

Construction Trends in 2019 and Beyond

Here are a few construction trends surrounding energy and transportation which we expect to continue beyond 2019:

Transportation construction projects at or near airports: even modern airports are in need of an upgrade in 2019. Most airports have a logistical problem moving people between terminals, parking lots, and other airport facilities. Chicago’s O’hare airport has undergone a massive construction project to replace their usual shuttles with a more sophisticated light rail system. More airports are likely to follow.

Construction of rapid mass transit: construction on heavy rail, light rail, and other municipal rapid transit is also on the rise. Even mid-sized cities like Pittsburgh have invested heavily into light rail transit to improve their public transportation offerings in recent years.

Massive energy projects including new power plants, refineries, and more: while the exact future of the energy industry is in a state of flux with new technology and legislations coming and going all the time, the demand for new energy solutions and the aging energy infrastructure all but demands massive overhauls.

Why Energy and Transportation?

As mentioned in the previous section, the energy sector has an uncertain future. One reality which is having an immediate impact on US energy construction is global demand for natural gas. The US is uniquely positioned to extract, produce, and provide natural gas to the global market. Additional energy-related products such as plastic refineries and chemical processing plants have all seen a demand increase in recent years.

As for transportation, we can primarily thank a crumbling infrastructure alongside population growth for construction demands. Whether it is maintaining existing roads, constructing light rail systems, or paving new roadways, the demand for transportation remains high in both urban and rural areas.

Mega-Construction Projects are Taking over Mid to Small Sized Contracts 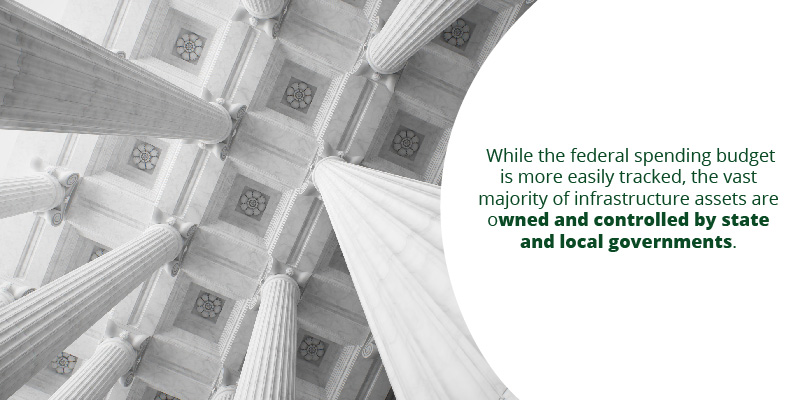 To understand why mega-construction projects are outpacing small and medium sized projects, we must first understand where the infrastructure spending budgets come from. While the federal spending budget is more easily tracked, the vast majority of infrastructure assets are owned and controlled by state and local governments. So why are these smaller governments suddenly funding more multi-billion dollar construction projects rather than many small ones?

There is no singular answer, but a major reason is that approving one project is easier than approving multiple individual construction efforts. These mega-construction projects with budgets in excess of $1 billion are also sold as economy-boosters. Whether they be a new sports stadium, improved transportation at the airport, or improving the current energy solutions, generating buzz around these projects is easier for politicians.

There is every reason to expect this trend to continue and possibly even gain momentum moving forward. Consider California’s high speed rail authority project. The total project was quoted in the $50 billion range, but has since been re-estimated at nearly $100 billion. This publicly funded mega-construction project will someday connect most of the main cities in California including but not limited to San Francisco, San Jose, Los Angeles, and San Diego. California’s project is commensurate with the state’s enormous wealth. Yet it remains a sign of the future of transportation and energy construction in the US.

Unfortunately, the reality is that overall infrastructure spending is still down. Federal, state, and local governments had nearly $10 billion less in spending power for infrastructure projects in 2017 when compared to 2007. The good news is that Americans are growing more amenable to both increased spending on what is an increasingly outdated infrastructure including transportation and new energy solutions.

The true trend is shifting from new construction to maintenance efforts. Despite the talk of modernizing transportation and energy infrastructure, most of those projects will be to retrofit current construction with modern solutions.