One of the concepts that the Federal Reserve’s FOMC dicussed in its March meeting was that of “soft data” compared to “hard data” in assessing the economy. With inflation rising again and the labor markets tight, the Fed will raise rates slightly at least three time this year, but the Committee made interesting observations about the actual state of the economy versus the perception.

Soft data is the more frequently-updated economic information that is the result of surveys, like consumer and business confidence or business hiring plans. The surveys of this kind – like the University of Michigan’s Consumer Confidence Index – have soared since the election on the expectation that a Trump Administration would lower taxes and regulatory burdens. Thus far, the administration has struggled but consumers and business owners have reflected little of this in their responses.

At the same time, hard data – like government employment or GDP estimates – is showing that the economy is performing pretty much like it has since the Obama Administration and Congress figured out how to play nicely after the 2013 government shutdown debacle. A look at the figure below shows how this spread between data and emotion looks. 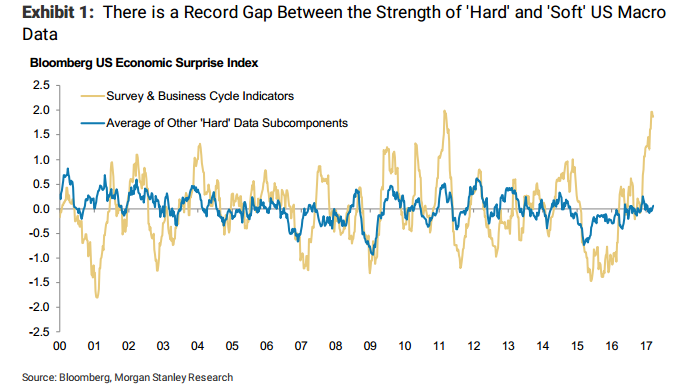 Bidding/contracting news is limited. One K-12 project of note is out to bid, the $14 million Todd Lane Elementary School addition/renovation in Center Valley School District. Massaro has the $2.6 million Johnstown Flood Museum project out to bid, due April 26. Mistick Construction is taking bids on the $30 million Eighth & Penn apartments and Elford Inc. has started construction on the $40 million, 274-unit Village at Cranberry Woods apartments. In Erie, E. E. Austin has been selected as CM for the $110 million Allegheny Health Network renovation of St. Vincent Hospital.